123 years ago, US President Harrison established Columbus Day to commemorate the 400th anniversary of Columbus’ 1492 landing in the Bahamas, and in October 1971 the United States officially recognized it as a federal holiday. In turn, American public schools have consistently reminded the youth of this nation to associate the second Monday of every October with the Niña, Pinta and Santa Maria. But this year, might I suggest that perhaps it would be wiser to recognize the Inca, Cherokee, and Lakota?

Seattle is the latest to join a growing list of municipalities shifting the holiday’s focus from Columbus to the people he encountered on this continent as well as their contemporary descendants.

In April the Minneapolis City Council adopted a similar measure to, “reflect upon the ongoing struggles of Indigenous people on this land, and to celebrate the thriving culture and value that Dakota, Ojibwa and other indigenous nations add to our city.”

In Lawrence, Kansas students from Haskell University have successfully pushed their city to honor their ancestors by declaring October 12th Indigenous Peoples’ Day. On Tuesday 6 October 2015, Mayor Mike Amyx recognized that the City of Lawrence, whose University houses 151 tribal nations, was built on the homelands of Osage and Kansa. Christopher Sindone, president of the Haskell Indian Nations University’s Student Senate said, “For them to pass something like this, as a city … that’s 180 years of resiliency by Native Americans acknowledged.”

And Portland Public Schools have announced that Indigenous People’s Day will supplement Columbus Day in Portland rather than replacing it outright. According to the Oregonian Greg Belisle of the Portland School Board said, “It’s not about one or the other, it’s about how do we get a complete picture to understand where we’re at in history, and how we got there?”

Despite the recent surge in popularity, an effort to move away from a celebration of Columbus is not new. Sixteen US states no longer recognize Columbus Day as a national holiday. South Dakota has officially observed Native American’s Day since 1990. Berkeley, California followed suit in 1992 when Mayor Loni Hancock told TIME Magazine that Columbus Day celebrations are “Eurocentric and [have] ignored the brutal realities of the colonization of indigenous peoples.”

According to Nolan Feeney of Time magazine:

Talk of an alternative to Columbus Day dates back to the 1970s, but the idea came to Berkeley after the First Continental Conference on 500 Years of Indian Resistance in Quito, Ecuador, in 1990. That led to another conference among Northern Californian Native American groups, Hancock says; some attendees, along with other locals interested in Native American history, brought their concerns to the Berkeley City Council. The council appointed a task force to investigate the ideas and Columbus’ historical legacy, and in 1992 they unanimously approved the task force’s recommendation for an Indigenous Peoples Day.

Hancock asserted that,“[Columbus] was one of the first Europeans to get to the American continent, but there was a lot of history that came after that in terms of the wiping out of native people. It just didn’t seem appropriate. It seemed like a reemphasizing of history and recognizing that to be very ethnocentric really diminishes us all.”

Hancock says there was vocal opposition to change but notes that most of it came from outside of the Berkeley community.

However common sense this disposition may seem, several Italian-Americans have denounced the shift, arguing that Columbus Day was an important celebration of Italian pride and heritage, and that changing the celebration is ‘disrespectful.’

Lisa Marchese, a lawyer affiliated with the Order Sons of Italy in America told The Seattle Times this week, “Italian-Americans are deeply offended. By this resolution, you say to all Italian-Americans that the city of Seattle no longer deems your heritage or your community worthy of recognition.”

While I may be a staunch supporter of unpopular opinions, I couldn’t help but wonder if Miss Marchese was aware for the reason the city is named Seattle at the time of her comment. I wonder what Chief Seattle would have to say to her ‘deeply offended’ Italian constituents: “Sorry our memory competes with your existence,”? And if we’re going to talk about being offensive, how about we address a point so fundamental it’s almost cliché: the genocide of tens of millions of Native Americans. Isn’t it more offensive that European immigrants all but exterminated upwards of 60 million human beings and threw what few remained into boarding schools and reservations – an ongoing crime that continues to this day? Wasn’t the destruction of native lands through clear-cutting and mining, the poisoning of their watersheds through industrialization and hydro-fracking, the annihilation of the buffalo, and outright disappearance of the natural biodiversity that used to exist on this land mass, as well as the outright dismissal that anything could be wrong with these events, more disrespectful than honoring the heritage of the very bloodline responsible for these atrocities?

And how does today’s sanctity-of-life obsessed culture juxtapose the hero worship of the Conquistadors against the condemnation of gun violence and terrorism? By today’s standards we would consider Cortez, Pizarro and all of their Conquistador marauders to be fundamentalist terrorist extremists. For example, Pizarro’s violent siege of the Inca Empire and subsequent enslavement and murder of Atahualpa was all shadowed beneath the justification of ‘Christianization’. The imperial takeover of the New World and subsequent genocidal looting likely could never have been brought about without a horde of Catholic fundamentalists who were absolutely convinced that they were carrying out God’s murderous will. In fact, the Castilian law of the Spanish Royal Crown explicitly prohibited non-Catholics from embarking on the conquest of the New World. This all would certainly qualify as the behavior of fundamentalist terrorists, but that’s not how they’re remembered. Certainly, considering them as such would severely contradict the mythology of the American Empire’s romanticized version of history that seeks to conceal our crimes beneath a mountain of lies.

The gears of American Empire would begin to grind to a halt if her children were remotely aware of the truth; that we fabricate evidence to perpetuate war profiteering; that we are the only country that has ever deployed nuclear weapons against a civilian population; that we arm and fund dictators responsible for human rights violations as unspeakable as they are uncountable; that we rewrite history to conceal our lawless abominations.

I used to think that the curiosity the led me to ask such questions would eventually proliferate into the culture at large, but more and more I see an outright unwillingness to acknowledge our authentic history. This has led me to wonder, where does this arrogance emanate from? Is Imperial Hubris a personality characteristic inherent within American Exceptionalism? Is it the result of the prisons that pass for schools today, where children are indoctrinated into left-brained fetishism while free expression is ridiculed and punished? Is it a byproduct of the inescapable barrage of propaganda, fear mongering, and war porn pouring out of news reels, films and video games as ubiquitous as they are outrageous?

Wherever it originates from, this ignorant vanity reveals a widely unacknowledged superiority complex that still exists within the decedents of European colonizers for whom decadence is an entitlement so coveted that we are willing to look beyond the profound human suffering that is required to produce it.

They say Indigenous People’s Day honors one group while disregarding the heritage of others, but doesn’t Columbus Day do exactly the same thing? Isn’t observing Columbus Day just a not-so-subtle reminder of who dominated whom? And isn’t it blatantly hypocritical for European decedents of any ilk to complain about commemorating their heritage on these stolen lands? It’s not like Native Americans have immigrated to Italy and demanded the Italian government recognize a national holiday in their honor. It’s not as if Native Americans are demanding from Spain, a restitution for all the gold and silver that was stolen from this continent. All that is being asked for is an accurate conception of history. You don’t have to feel shame or guilt for what was done to the Native Americans especially since this generation had very little to do with these transgressions. But we are the descendants of those who committed these crimes, so we should at least have some respect for the dead and acknowledge what happened. We can’t change the past but we can change our behavior for the better based on an accurate understanding of the past.

Despite what American schoolchildren may learn about “Columbus sailing the ocean blue in 1492,” teachers rarely if ever mention that, “in 1493, the Europeans stole everything they could see.” Columbus should not be celebrated for “discovering” America because neither he nor any of the Conquistadors that followed him ever discovered anything. Tens of millions of people had already inhabited this land for centuries by the time Europeans crossed the Atlantic, and they’d done it in harmony with nature. European settlers were stunned to find sprawling cities larger than any of the capitals of Europe when they arrived here, and even more surprised to find that these metropolises did not have any of the pollution problems that Europe did. And while much of this might seem like romanticized wishful thinking, the journals of European scouts prove these assertions accurate. It only seems fantastic because the version of history we have all been spoon-fed by our public school system is such a dramatic forgery – because when a well-packaged web of lies has been sold gradually to the masses over generations, the truth will seem utterly preposterous.

Seattle Councilmember Kshama Sawant announced last year, “Learning about the history of Columbus and transforming this day into a celebration of indigenous people and a celebration of social justice … allows us to make a connection between this painful history and the ongoing marginalization, discrimination and poverty that indigenous communities face to this day.”

While history is all too often written by the subjugator, many researchers and professors have successfully peered through the omissions, distortions and lies of the commonly accepted Columbus narrative to present modern minds with a well-documented account of how we got here. Historians such as Howard Zinn, Jared Diamond, Charles C. Mann and James W. Loewen illustrate that history is not black and white; that an accurate history is essential for us to understand today’s circumstances; that history is the only subject so frequently mis-taught that college professors consistently make considerable efforts to help their students unlearn the fictitious stories drilled into them by the federal public school system. This is also why so few Americans know who America declared independence from in the Revolution, what century the civil war was fought in, or why US troops were sent to Vietnam. We need to know our history, or we’re doomed to repeat it. Ironically, a thorough study of history confirms that people have been repeating it for centuries as a byproduct of not studying it.

So at the very least, today’s schoolchildren should understand that the purpose of European Imperialism into the New World was not to pave the way for a federal holiday to be celebrated on the second Monday of October by self-entitled Americans, so much as institutionalize coerced colonization, subjugation and decimation of the indigenous population.

In the words of James Lowen:

“Cherishing Columbus is a characteristic of white history – not American history.” 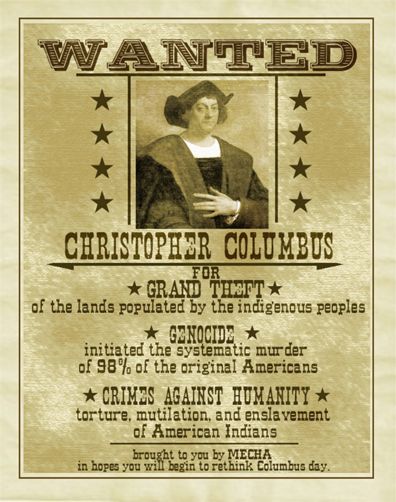