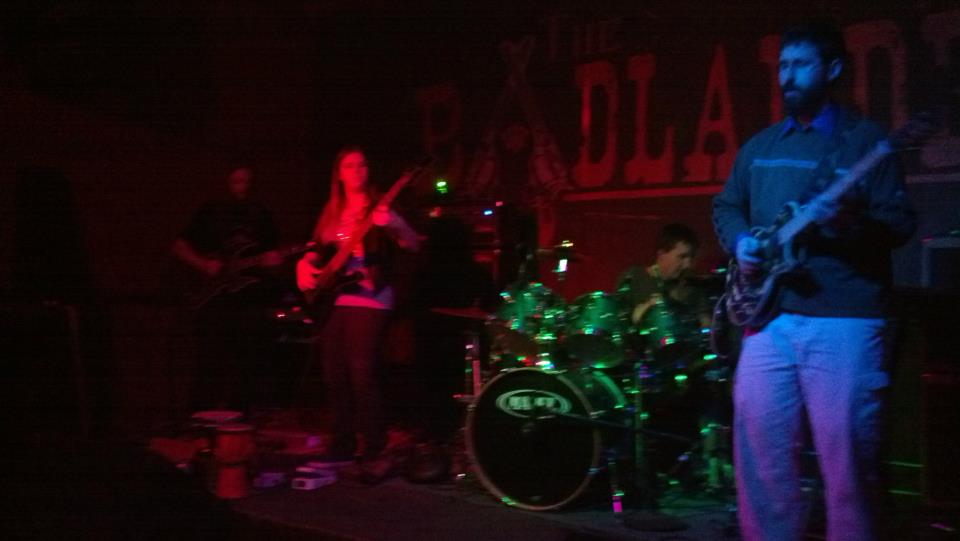 Buddhist rock band darshan Pulse (dP) was born in the musically rich community of Missoula, Montana, in the heart of the Rocky Mountain Pacific Northwest. After publishing a concept album called Panopticon in the spring of 2010, dP worked on a second concept album: Olive Moksha (OM). This ambitious project was crafted with the intention of guiding the listener on a wordless journey, which tells a timeless story of three monks as they navigate life, death, and rebirth. The story takes us from Dukkha (worldly suffering) to Anatta (the slippery and nuanced doctrine of “non-self”).

Time and time again we find evidence that music is capable of producing dramatic alterations in consciousness. Since consciousness seems the bedrock of all creation in this dimension, this observation seems to infer the question, To what extent might music be capable of changing the world?

The basic idea/assumption that generated the music theory and musical forms that underlie Olive Moksha is this: that the scale a melody is played in has a reliable emotional affect. Usually this is limited, in most music, to major (a happy, uplifting, simple-sounding scale) and minor (an introspective, darker, complex-sounding scale). Our composer realized that major and minor are simply permutations of the same underlying circular sequence, only starting in different locations.

Turns out, surprising no one, these scales have been around since the time of the Greeks, and got the names we know them by in the 1200s – they are called Ionian, Dorian, Phrygian, Lydian, Aeolian and Locrian – and they have the ability to paint melodies in more subtle shades of emotion than just Happy and Sad. But it goes much deeper.

Those that have some experience with concert band or private musical lessons will also be familiar with the scales of Harmonic Minor and Melodic Minor – these scales mostly came about because composers wanted to have the satisfying linear harmonic motion they get so easily in a V-I major cadence, but transposed into minor. Crucially, these scales don’t overlap with the major/minor sequence – they are wholly new seven-note sequences, each with their own unique Do, Re, Mi, etc., on which new scales of a more exotic nature are revealed.

By way of example, one scale employed, given the moniker of “Romantic” by the band, has a “sweetly sour nostalgic warmth” to it. It’s also the fifth mode of the Melodic Minor scale, starting on the relevant So. In C, meaning all the white keys, it would be C major with a B flat instead of a B and an Ab flat instead of an A; in A, the same scale would be A minor with a C sharp. This means, in terms of Romantic’s emotional qualities, it lies two steps away from Major, and one step away from Minor. The fact that this scale has the emotional quality that it does  — lying closer to minor than major on the emotional axis — is not coincidence.

Of course, every theory has its limits. Even though we find a total of 28 potential scales, derived from 4 unique seven-note sequences (4×7=28), a sizable minority of them are unsuitable for practical reasons. (The main problem is that 3 of these scales have an unstable augmented chord as their Do, or root note, and 7 of them have a diminished chord. “No good,” say dP. They are just too far from Major and Minor, harmonically, to make sense to our Western ears (music appreciation being a subjective and fickle cultural beast). Thus we are left with 18 stable scales on which to base our emotional narrative: four scales each from Melodic Minor, Harmonic Minor, and Harmonic Major; and six scales from the Major sequence, the original Sound-of-Music Do-Re-Mi.

Armed with a pallet of 18 emotionally unique colors, dP paints an intricate and spine-tingling sonic tapestry of electric wizardry to evoke the story of Olive Moksha.

Dukkha, the state of suffering and want, begins our tale. Upon this background the curtains rise on three monks, performing their daily duties at a nameless monastery. They cut wood, carry water, tell stories (Vihara Devoir).

On the monastery grounds there is an olive orchard, where the monks work and meditate. One night, while the monks are meditating under an ancient olive tree, Avalokiteshvara, an enlightened being, the Thousand-armed Buddha of Compassion, appears to them in a vision. He tells them to leave the orchard to become bodhisattvas and wander the earth spreading good works in every direction. They immediately depart, each traveling to a different hemisphere, giving their lives over to public service (Wandering Bhikkhu). By and by, they live out their lives, gradually winding down, passing peaceably into the spirit world without malice or despair. Their bodies are sent back to the monastery for burial (Request to Laura).

Upon death, each of them sees for the first time the transient nature of all things — a movement of lightness and air enters them. They pass through the bardos between death and rebirth, first re-experiencing their lightest thoughts and moments of fleeting grace (Pala Moksha), followed swiftly by a re-telling of their darkest, most selfish thoughts, and moments of weakness (Sidpa Bardo). Unable to remain coalesced into a separate Will, facing an unknowable choice between rebirth and nirvana, each monk’s selfhood is torn apart in the transition (Tulku Bhava).

Years pass, and three children are born, each somewhere in the first world (Ici Avant). They come of age in an ailing society, overfull with violence and thoughtlessness, and struggle with the desire to take the right action instead of the easiest action. Desperate for an answer to the deepest questions that plague them, they each search for their own Truth, wherever it may lead (Quarry Unhewn). By and by, through hill and vale, the children find themselves at the doors of an ancient monastery. The scent of fruit oil and brine fills the air with peace and sweetness.

The abbot of the monastery meets with each child. It is clear from their meeting that this is not the first time they have met. The children know too much at too young an age. The children and the abbot talk long into the night, contrasting stories of a bygone time of a natural rise and fall with those of woes of present unmet wants. Exhausted from the revelation, the children stay the night at the orchard, sleeping under an old half-dead tree (Padme in the Orchard).

During the night, the children are visited by Avalokiteshvara in a shared dream. They see that their seemingly separate personalities are actually three emanations of a singular presence as their consciousnesses merge with that of the transcendent being. They awaken at once to the brightness of the full moon, she having suddenly slipped off her blanket of cloud. Having momentarily stepped into a larger world, they are struck still by the realization of Anatta, or no-self; that there is no difference between themselves, the old monks, and the Bodhisattva nature of all sentient beings. They rise with the Knowledge, the Sight, and the Truth. Whether they live long and well, it is not for us to say. But having experienced Moksha, they are free. 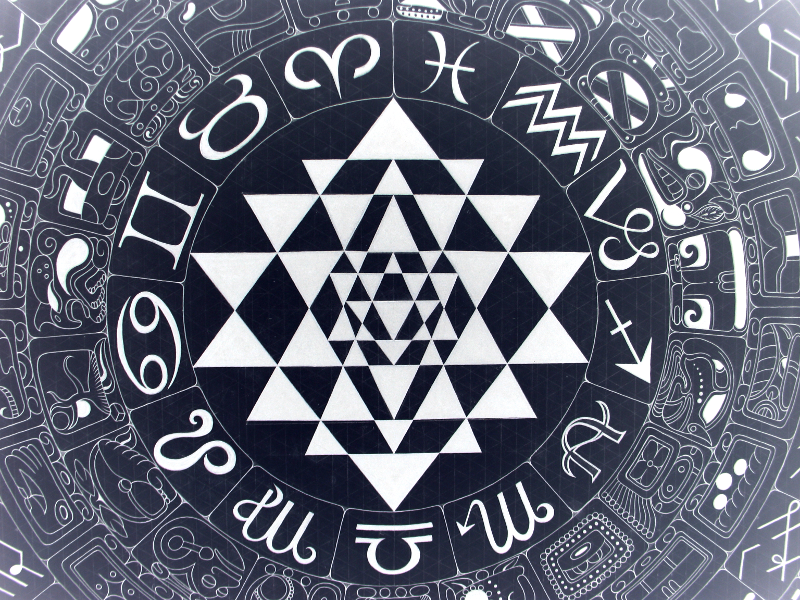 Clocks are circular, and depict time, which certainly varies regularly, in predictable cycles. In the modern world, we track days with a sweeping hand, tracing out the same daily patterns and routines. However, our post-industrial monitoring of weeks and months is linear, tracing a straight line towards the unknown. We imagine ourselves standing on an infinite sidewalk down a main thoroughfare, with the unknowable future blocks ahead and the forgotten past blocks behind.

Other cultures don’t necessarily share this linear fascination; the Western Zodiac contains one cycle of time, the Hindu Yugas a second, the Mayans a third. Even the sky itself spins slowly in its own lazy circle. Each foretell rises and falls. Thus dP’s artist and illustrator was inspired to design a Universal Calendar for the album’s cover, depicting several cycles simultaneously. On the outermost rim, the I Ching awaits us, followed by the Hindu Yugas, the Mayan Ha’ab and Tzolkin calendars, and finally the Western Zodiac, all held together by the nine-triangled Sri Yantra. The combined wisdom of these otherwise disparate calendar systems allows for the realization that while we might each focus on different bits of the pattern, we are all watching the same fireworks show.